To complete a strange and truncated year the CILT Golf Society held its season-ending Autumn Meeting on 14th October at the excellent Northamptonshire County Golf Club.

The weather was very kind to us and 27 members and guests turned out to tackle the challenges presented by this gem of a Harry S Colt course. As usual, some found the going more difficult than others on a course that favoured long, straight tee shots and good skills on and around the greens.

Members and guests were served a terrific three-course meal as they came in after their round, followed by prize-giving for the day and as appropriate for the shortened season. 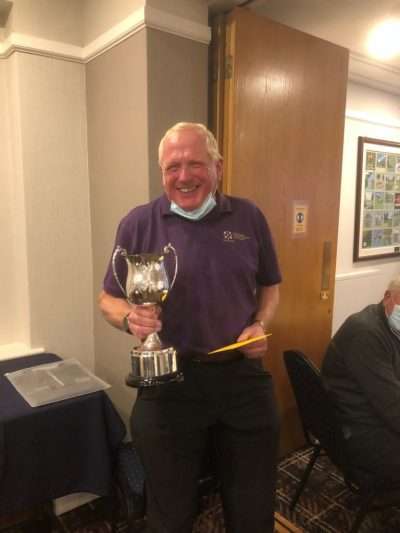 In the absence of self-isolating 2020 Golf Society Captain, Bob Harper, Immediate Past Captain, Cameron Grant, announced the day’s winners who collected their prizes from a suitably arranged table. The Guest Prize was won on countback by Malcolm Mitchell (33pts) from James Surridge (playing off +1). Continuing his late season form (having won the September Tour Prize), and also on countback having scored 22 points on the back 9, Paul Beever (34 pts) just edged out a tremendously gracious Cameron Grant for the members Autumn Trophy. Last year’s winner, Keith Allison made a valiant attempt to defend his title and ended up in 4th place behind Brian Reid after another countback!

Golf Society Chairman, Paul Symes, then summed up a ‘different’ year. It is customary to do a hand over to next year’s Captain at the Autumn Meeting but, not having been able to hold an AGM to elect a successor and given his shorten tenure, Bob Harper has agreed to continue his captaincy for 2021.

The Members Meeting in March and the Summer Meeting in June were both casualties of the pandemic. With thanks to all concerned in the reorganisation, the Spring Meeting originally scheduled for June at Hankley Common GC was played belatedly in August. The first event of the season was therefore the match against the Liberal Club Golf Circle. This was played at West Essex GC in late July and resulted in an honourable draw. As mentioned above, this year’s highly popular Annual Tour ventured to Yorkshire in September and is booked to return to this area in 2021. Ever-changing coronavirus rules permitting, the annual match versus the Oil Industry GS is due to take place at Denham GC on 27th October.

With respect to customary season-long competitions, it has not been possible to play the Knock-Out competition for obvious reasons. However, based on 3 rather than the usual 4 events, Cameron Grant was justifiably awarded the John Swanson-Smith Trophy.

Brian Childs received our thanks for organising the Autumn Meeting (even though he was unable to play), as did event sponsors Adrian Malupa (FPS) and Michael Pestereff (Artko). Grateful thanks were also extended to the club for providing a course in such wonderful condition for the time of year and a Covid 19 restriction-compliant environment in which to enjoy great food and prize-giving.