Off and running at Hankley Common

After the trials and tribulations of last year, it was a delight to hold the 2021 Spring Meeting at its spiritual home of Hankley Common Golf Club, and in the traditional month of May.

The Covid restrictions have provided a real challenge to the ability of golf clubs to respond to the backlog of demand from members and visiting societies and one consequence was that we were limited to a field of 28 players for this event.  At the same time, enthusiasm from members to get back together meant that bids to enter exceeded that number so we had to run a reserve list and eventually disappointed 3 of our GS members.

Notable among the five very welcome guests were three single figure handicappers including, for the first time in several years, a lady. Not only that, but Hilary Allen is an ex-Cambridge blue.

The course was in tip-top condition as usual and the weather was kind. As expected of this first class venue, the hospitality and catering facilities were excellent and absolutely in line with pandemic regulations. An unexpected bonus was a complimentary soft drink and biscuit at the half-way hut – with photo-opportunity – thanks to Hankley Past Captain, Richard Gibbon

This was the first event to be held under new World Handicap System (WHS) rules, but with suitable modifications to account for those participants without an official club-monitored Handicap Index. Suffice to say that the new system seemed to work well, with the best scores on the day coming in bang on handicap and no-one being labelled a bandit. 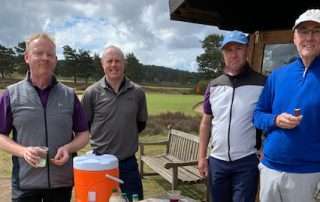 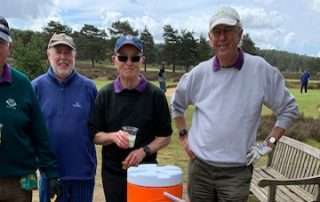 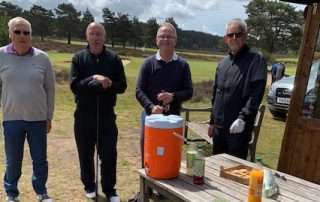 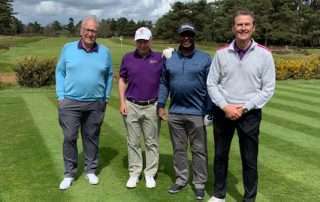 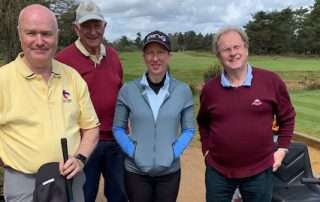 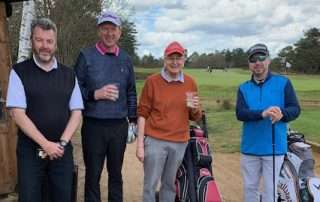 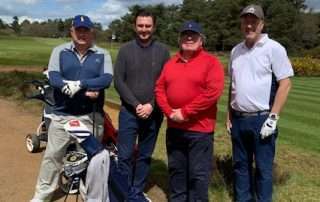 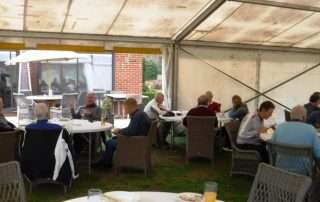 After a splendid lunch in an open air marquee, competition winners were announced by the meeting organiser, Peter Wood, and prizes presented by the 2021 Society Captain, Bob Harper, accompanied by the event main sponsor, John Maguire of Narrow Aisle Ltd. 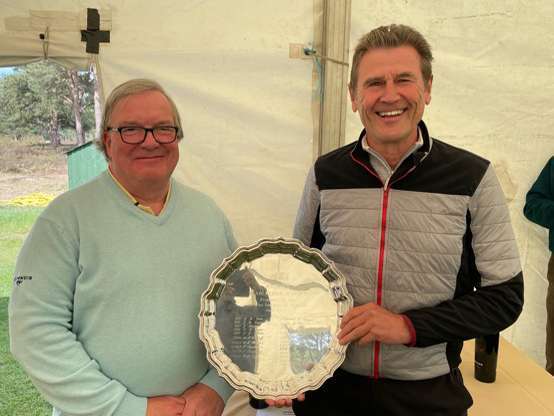 There were signs of lockdown rust in many of the early swings, but a number of people put all that behind them and managed to pick up a prize or two.

Mark Lucas achieved the Longest Drive on the 8th Hole.

In the member’s competition, 4th placed Phil Reeves was edged out by event organiser Peter Wood for 3rd place.

One of the fiercest rivalries in sport was once again in evidence when it came to the award of Winner and Runner-Up prizes. Hankley Common has seen previous epic battles between Bob Harper and Cameron Grant, with Cameron often victorious in recent years. However, on this occasion, Bob Harper took the honours with a winning score of 35 points – on countback.

Thanks were given to Peter Wood for organising the meeting so efficiently and Narrow Aisle Ltd, through John Maguire, for their generous sponsorship.

After the success of this one, the Summer Event at Copt Heath GC near Solihull on Thursday 24th June can’t come around too quickly.